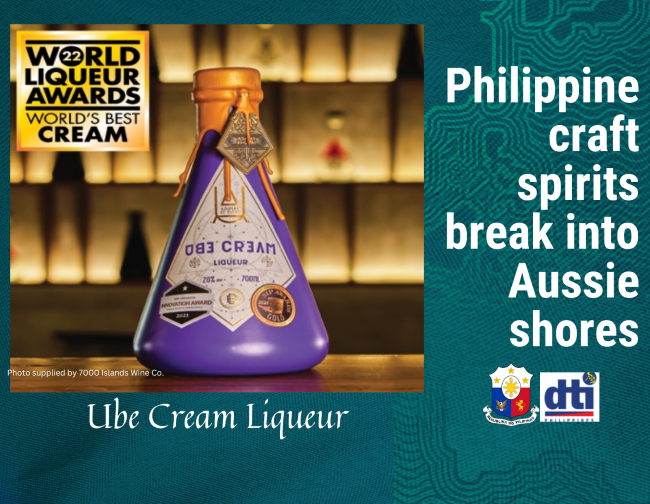 Philippine-made craft spirits have been making their way into Aussie shores since 2020 and more are expected to be available across Australia in the coming months, the Philippine Department of Trade and Industry’s overseas office in Sydney announced.

Ambassador De La Vega said Filipinos are known to enjoy beer as the most popular alcoholic drink of choice. However, in recent years we have seen an increasing variety of drinks in the market with premium and craft-driven brands focused on rum, gin, tropical liqueurs, as well as wines made from indigenous fruits such as coconut, bignay (Philippine wild berry) and duhat (black plum).

“Philippine alcoholic beverages and craft spirits have been making waves across the globe with several distillers garnering some of the largest awards available in the spirit industry. This is an interesting opportunity to highlight not only our Philippine drinks, but also share the traditions, stories, and provenance of the product,” Alma Argayoso, the Philippine’s trade representative to Australia said.

In 2020, Stuart Alexander, one of Australia’s oldest and largest privately owned companies that imports and distributes premium global brands added Don Papa Rum to its expanding range of beverages. Don Papa Rum is a premium aged small-batch rum made from sweet sugarcane grown on the lush island of Negros the sugar capital of the Philippines.

Another rum with a sunshiny spirit conquering the Australian market is Kasama Rum launched earlier this year. Kasama which means “together” in Filipino celebrates the joy of coming together with family and friends. Inspired by the tropical Philippine archipelago, Kasama Rum is a seven-year-old rum distilled from freshly pressed noble cane juice, then aged in American oak barrels.

Meanwhile, 7000 Islands Wine Co. aims to leave you smiling with a sense of place and taste through their distinct range of small batch Australian wines and craft spirits from the Philippines. "We are a new company that seeks to break down barriers in the world of wine, and expose Aussies to Filipino craftsmanship," said Siegfrid Bacani of 7000 Islands.

7000 Islands is the inspiration of founder Siegfrid Gueco Bacani, formerly of Bacardi-Brown Forman United Kingdom and Moët Hennessy Australia. Bacani expressed to DTI Sydney his vision to both ‘demystify wine’ for Filipinos and help Australians ‘discover Filipino flavours’ that are foreign to their taste buds. Born in the Philippines to Kapampangan parents, Bacani was raised in Australia after immigrating with his family in the late 80’s.

"Our vision is to create Australian wines that are in perfect harmony with the tropical gastronomy of the Philippines - the cuisine of my upbringing. I'm also immensely proud to be bringing to the Australian market "The Finest of Filipino Craft" spirits from the 7000 islands' of the Philippines. It's about time our fellow Aussies discover the craftsmanship of the Filipino," Bacani said.

First in their Filipino imported spirits portfolio is the award-winning Ube Cream Liqueur. Crafted by Destileria Barako in their distillery in Malay, Aklan, Philippines, Ube Cream Liqueur was recently awarded as World’s Best Cream Liqueur for 2022 at the prestigious World Drinks Awards. This one-of-a-kind drink is innovatively crafted with sugar cane vodka from Negros blended with real cream and the star of the show, natural Filipino 'Ube'. Ube from The Philippines imbues a beautiful purple colour and gives a supple, earthy, vanilla flavour. This world-first alcoholic beverage is now recognised globally as World's Best.

7000 Islands is also bringing to Australia Proclamation Gin, a socially conscious gin which is made with hand-picked sampaguita flowers. Proclamation Gin is the brainchild of creators Carlo Calma and Cheryl Tiu who responsibly source their sampaguita flowers from women farmers in Pampanga, Central Luzon. The sampaguita buds are bought at a premium, and this not only enables their livelihoods - but also supports their agricultural communities. The gin celebrates both the Philippines’ national flower ‘Sampaguita’, which means “Sumpa kita” or “I promise you” in English, and is perfectly balanced with ‘rice’, an important Philippine crop and a Philippine cuisine staple.

Bacani said “The past few years has seen Filipino cuisine become more mainstream in Australia. I strive to promote Australian wine regions and varieties that are perfectly matched with our delicious Filipino cuisine. Our ‘Finest of Filipino Craft’ range is also growing, and we continue to champion 100% proudly Pinoy products that shine a light on Filipino artistry. Our world-class Filipino alcoholic beverages are available to order online and via wholesale.”